Why do you need to Snow groom?

Some people understand why you need to groom your snow? Others just want to play in the powder.  Depending on your dreams and wishes there is only a little time where you have virgin powder.

Getting to where the virgin powder is, can also be trouble unless you snowgroom.  Getting to good powder often needs a trail.

The case for snowgrooming starts with trails.  If you groom your trails quickly after a snow then you can ride those trails more without there being moguls.  Even after riding on trails that were groomed they can still get moguls. Going over it again can take out the moguls. Although it is way better to groom and pack your snow before it gets ridden on.

Why you need to snow groom.

Grooming your trail lets you get off your machine and not sink in deep snow.  It also lets you go way faster. If trails are not groomed and there gets to be big moguls, not only does it hurt your back after a while it makes it so you cannot go very fast. Just too bumpy and you have no control on a snowmobile.

Getting to your favorite ski hills or tubing runs is much quicker and easier when your trail is properly groomed.

Often trails and hills are groomed at night so that they are ready the next day for people to play on. When snows at night it is real smart to groom the snow right then. If you can plan ahead and groom the snow as soon as it is done snowing then it makes a huge difference for use later.

If you wait to groom and let multiple snowmobiles or sleigh riders go on the trail before grooming, then the trails can get rutted up.  It can even make it harder to get to the end of the trail to use the rest of the snow.

Sleigh riding on groomed snow is so much more fun.  No bumps to ride or bounce you off a trail. Smooth riding is a big deal.  Once a sleigh riding hill or trail is groomed there are more uses. In fact, where we live if we do not groom the local trails then the neighbors will come and ask us to groom.

Grooming the snow just makes it more enjoyable, allows more people to use it, and allows kids to walk up the hills to ride back down.  If the snow is not groomed walking up the snow on a hill can be difficult for most. Grooming packs the snow and makes it much easier to walk on.

People use snow for skiing, sleigh riding, and snow boarding often in the same places.  Skiing and snowboarding does different things to the snow. Especially before it is groomed. If you groom snow then the trails and hills do not allow ruts or cause the snow to be used in a different way than you want it.  Moguls or bumps and ruts take a lot of fun out of the hill.

Dog sledders know how hard running in deep powder can be.  Grooming the trail can make all the difference in running your dogs. 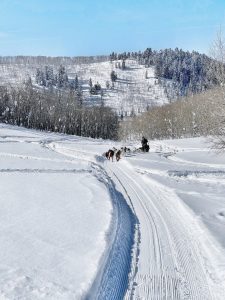 snow groomed trail for the dog sleds to run on.

Sometimes you need to remove snow from a trail.  Groomers can do this as well. Especially if there are drifts. Dog sledders have a hard time running in deep snow. Ski-joring is difficult in deep snow as the horse hooves dig big holes in the deep snow.  Use a plow or groomer to get rid of snow that is not wanted on your trail.

Groom your snow to make the trails safe, fast, and smooth.  Bumps and ruts become slower when the trail is groomed.  If there are bumps and ruts forming re-groom to take them away.  Often when groomed, the snow stays longer, it will not blow away after groomed.  It does not melt as fast. Grooming really does make more snow available to play in.  There is nothing like a smooth groomed hill to share with others. To play on with others.

Whether the trail to the cabin or the lake or back into the hills, riding a groomed trail is a huge difference. Even if just making a walking trail, grooming and packing the snow is a beautiful, fun, and easy.

If you have not groomed your trails or hills, You have been missing out.  I mean big time. Snow is often a gift. Grooming it may be like saying thank you for the gift.