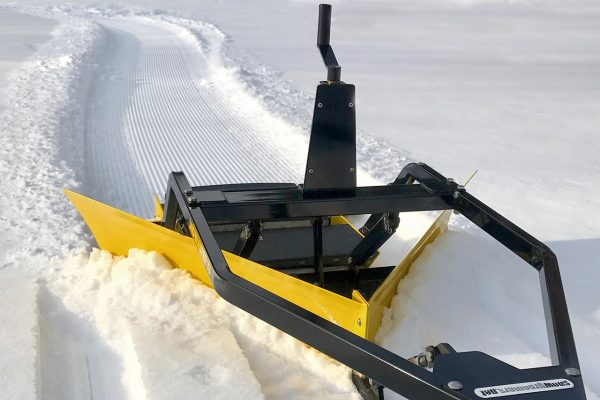 small groomer that removes excess snow and leaves a packed corduroy trail to fat bike, walk or snowmobile on..

The SNO-BLASTER 33 Fat Bike groomer features a patented 33” (838mm) wide V-Plow that floats on a compacted trail base or can be adjusted up to leave as much snow as desired. Plow snow to the right depth to enjoy Fat Bike riding.

Developed primarily for Fat Bike trail grooming, it also clears snow from lake and outbuilding access trails in a hurry. Snow on slush-covered lakes can be cleared away, allowing the slush to freeze. The plow runner/ski moves the plow up and over hidden obstacles. The plow lift permits 5” of adjustment and allows the plow to be carried out of the snow when establishing a trail.

This Fat Bike trail groomer is extremely fun and easy to use.

Or, scroll down to see the pricing on the SNO-BLASTER 33 packages

Specifications subject to change without notice.

Specifications subject to change without notice.

Plow the snow to the right depth with the sno-blaster while compacting the snow that is left and having corduroy left as the trail is a dream trail for fat bikes.

We know of no other fat bike groomer that plows, cuts, compacts and leaves corduroy for those using your trail.

The sno-blaster was designed to solve the issues people have when snow grooming for fat bike trails. Some people use rollers to make snow trails for fat bikes. Rollers do not take out moguls left by snowmobiles. A roller is better than nothing and is often used when people have not yet heard about a sno-blaster. Taking out the whoops is key for fat bike trails. If you leave the whoops and just compact them the up and down will make you ride much slower.

In deeper snow and especially in deep powder running a groomer or roller will have the snow falling back into the trail. The wings on the snow blaster can push back the powder that would fall into the trail.  It even leaves it at a reasonable angle and not a 45 degree which just lets the snow fall back in. Weet snow that falls back in and then freezes leaves frozen snowballs that become hazards on your fat bike trail. Even when you pick up the blade so you keep the snow. A picked up blade can still take out big drifts and not just pack them into speed bumps.

When riding fat bike trails there can be ruts left by the bikes themselves. Especially when the trail is ridden when it is warm enough to be slushy. The blade can cut down and fill in the ruts.  A really rutted up trail from slush and then frozen is not a fun trail to ride on.

One more key thing is that you can regroom your trail with the blade up just enough to remove no snow. But it will remove the excess snow from places where snowmobiles cross your path, pushing snow into the trail and leaving good bumps or jumps.  Or where drifts are made just by blowing snow.

Being able to add weight into the pan of the sno-blaster can compact the snow to the right consistency.  The design of our fat bike groomer is extremely durable and it can take a beating over the years, take care of fat bike trail needs and leave nice smooth corduroy to ride on.